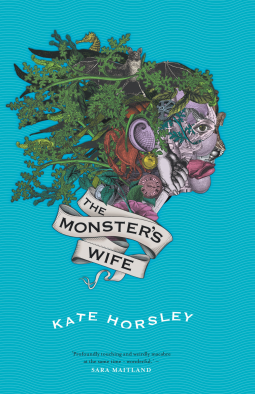 Set on a tiny island in the Scottish Orkneys, Kate Horsley’s The Monster’s Wife

is a brooding and atmospheric sequel to Frankenstein, told from the perspective of the future bride of Frankenstein. Calling this novel either a sequel or a reimagining does Horsley a disservice. This is very much a gothic creation with its own identity and texture. At its heart is the friendship between two young women who find themselves drawn into the struggle between Dr. Frankenstein and his Monster.

The small island of Hoy is its own peculiar little world, and Horsley paints a lyrical and occasionally morbid portrait of island life. Oona is a wild, stifled young woman, doomed by the same illness that killed her mother, she lives her life in the shadow of her impending death, dreams of escape and the world beyond. May is her closest friend, the rock she clings too, but May is slipping away, and they find themselves drawn to the mysterious Dr. Frankenstein, becoming his accomplices. Their relationship takes several dark turns, as Oona fumbles her way towards understanding Frankenstein and his purpose for them.

is a lyrical and touching debut. Horsley has created a gothic world of her own out of Shelley’s novel and allows the reader’s knowledge to haunt the story, as she slowly builds towards her tragic yet hopeful climax. Ambitious, moody, and deeply enjoyable.

One thought on “The Monster’s Wife by Kate Horsley”