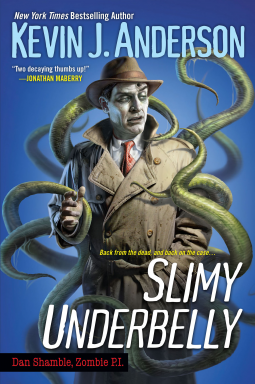 is a comic monster mash up noir. Dan Chambeaux, more commonly known as Dan Shambles, is a zombie P.I. in the Unnatural Quarter dealing with cases ranging from a Troll Opera singer’s stolen voice, allegations of campaign misconduct between dueling weather wizards, and a budding mad scientists stolen inventions. Meanwhile there is a rampaging gang of garden gnomes and a tentacled villain named Ah’Chulhu (to which the usual response is “Gesundheit!”).

After reading a number of novels whose ambitions were laudable but whose reach exceeded their grasp, it is refreshing to read a novel that is aiming squarely for pulpy fun and succeeds. Dan is a zombie detective of the hard-boiled variety, but never descends into outright pastiche. Ah’Chulhu is, perhaps, a more outright Lovecraftian satire it is done with a loving and knowledgeable sense of fun. Anderson includes a number of references that range from the obvious to the obscure that shows an in depth knowledge of the genres he’s playing in.

is a fast paced, exuberantly fun read, filled to the brim with monsters of every description, often just trying to run their business, or deal with unresolved mommy issues. This could easily have turned into an incoherent mess of references, but Anderson has walked the tightrope without ever loosing the sense of giddy fun. He clearly loved writing this book, and it shows.