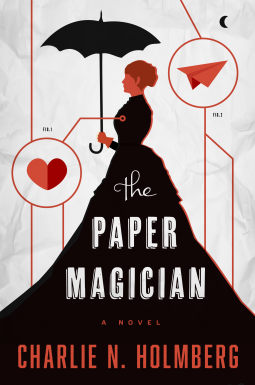 is a charming, if slight, slice of Steampunk fantasy. Ceony Twill has always dreamed of being a magician, a smelter to be precise, bespelling metal. Top of her class at the Tagis Praff School for the Magically Inclined, she finds herself apprenticed to Emery Thane, a paper magician, and her dreams shattered. Resigning herself to a demeaning and denigrated discipline, Ceony begins to find a strange and wondrous power in paper magic, and learns that her eccentric, handsome mentor is harboring old wounds and dark secrets.

The novel takes place in an alternate turn-of-the-century England where magic is prevalent and highly regarded and Excisioners—a practitioner of dark, flesh magic—are hunted down. It is an interesting but lightly sketched world, which can be applied to the novel as a whole. There is little sense of the world beyond the immediate characters.

Ceony is a determined and intelligent young woman, but despite being the viewpoint character is oddly underdeveloped. She reacts to events, takes bold action, and even begins to develop feelings. These actions, however, are rushed and appear at times more a function of the plot than organic developments. Thane, the titular paper magician, is better developed at least in terms of backstory. The earlier parts of the novel, which concerned itself with slow world building and Ceony and Thane cautiously discovering each other, was effective and intriguing, but a full third of the novel primarily consists of extended exposition where Ceony learns her mentor’s history. Thane himself is absent and passive for most of the novel leaving his character more told than experienced.

is closer to a novella than a novel which explains many of these issues. Holmberg has created a whimsical world with hints of darkness and an original form of magic based in part on origami and paper mache. The central relationship between Ceony and Thane is likewise promising, but barely developed. Despite some reservations, Holmberg has an engaging writing style and a world worthy of revisiting.

**Received an Advance Copy from NetGalley for Review