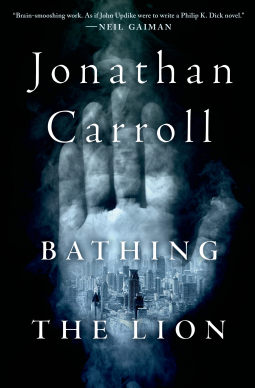 is a surreal, metaphysical tale of friendship, broken marriages, and the cosmic conflict between order and chaos. In a small New England town, five people go to sleep one night and find themselves sharing the same dream. Some of them know each other, some of them are married, some of them had never met before. From their shared dreams, and relationships, an eerie world of symbols and metaphors unfolds leading to half-glimpsed revelations about the nature of the universe.

The five New Englanders—Vanessa, Dean, Kaspar, Jane, and Bill—used to be “mechanics,” inhuman beings who restored order to the universe when chaos threatened, before they were retired and given new memories. Now their retirement is over and their old memories are being reawakened. The universe is in the midst of an upheaval, chaos has been unleashed, and the retired mechanics throughout the universe may be the only hope.

For all the vast cosmic nature of the premise, this is a tightly contained novel. The great conflict between order and chaos is shown through the prism of the characters experiences and perceptions. This is as much a story about their human lives, frailties and relationships, as it is about the nature of the universe. This is both the novels greatest strength and greatest weakness.

The characters are engaging and well drawn in all their human frailties and hopes. The early parts of the novel are focused almost exclusively on Vanessa and Dean’s crumbling marriage with only minimal traces of the supernatural or the weird. When the larger plot emerges, and Carroll begins to provide answers—half-seen and beyond human understand, but answers nonetheless—the characters recede from focus some disappearing altogether, at least in a human sense.

is a hugely ambitious, surreal, yet very human novel that plays with grand ideas on a cosmic scale, while also trying to marry those ideas to a human story. Indeed, the interplay of the cosmic and the human is a central theme of the novel. Carroll has a sure and practiced hand, and if he does not quite pull all the various threads together, he nevertheless succeeds more than he fails. Thought provoking and metaphysical, this is the sort of strangeness and ambition I enjoy most. I look forward to seeking out Carroll’s other, longer works.

Received a Copy from NetGalley for Review