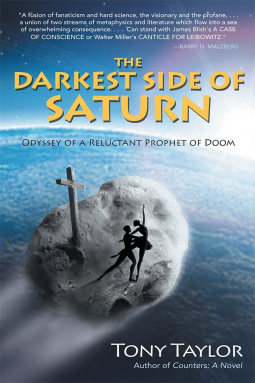 Tony Taylor spent many years working for NASA navigating Voyager, Cassini, Mars Polar Lander, Galileo, and Messenger throughout the solar system. His expertise and experience shines through in The Darkest Side of Saturn

, an ambitious, engaging, occasionally satirical and profound exploration of science, faith, what in means to be human, and ultimately the nature of the universe itself.

In 1997 Harris Mitchel, a spacecraft navigator, and an astronomer, Diana Muse-Jones, discover an asteroid on an apparent collision course with Earth. Naming the asteroid ‘Baby,’ Harris and Diana ponder what to do with their discovery. Further calculations cast doubts on their prediction of impact, but Harris believes the risk is sufficient and determines to warn the world. His efforts to do so draw scorn and derision, but also minor celebrity, a growing number of followers, and the enmity of Rev. Dr. Ernest Farnsworth, a fundamentalist preacher. When radio personality, James Conland, attempts to capitalize on Harris and Farnsworth’s feud, Harris finds himself adopted as an unwilling cult figure, a doomsday prophet who only ever wanted to present the world with his scientific findings.

Through Harris, Taylor constructs a satirical look at the nature of science, religion, bureaucracy and culture, while ultimately providing a hopeful treatise on the nature of the universe itself. The Darkest Side of Saturn

is ambitious, sometimes too ambitious for its own good. It tries for too much and can get lost in its own ambition. Nevertheless, it is full of fascinating concepts both social and scientific, and while it strains the bounds of credulity at times, it remains well grounded and in some place all too real. An unexpectedly thought-provoking novel that manages to earn its cosmological finale.