It was three days before Curtis met the man of spoons, or as Curtis (and billions of other people) called it—today. This particular today was distinguished from all preceding ‘todays’ because it was not yet yesterday. It was, however, precisely three days, twelve hours and nineteen minutes before the encounter with the man of spoons. It never would have occurred to Curtis to count the minutes or days or hours.

Today. Yesterday. Tomorrow. Empty vocalization. Hollow sounds. A slight dropping of the lower jaw. Thrusting the lips forward as the tongue strikes the roof of the mouth just behind the upper teeth. Then the tongue retreats slightly, the lips pull back and the jaw lowers even further. The vibration of vocal chords. A noise. A sound. A word. But Curtis hears only ticks and tocks.

When Curtis was born, his father owned thirteen clocks.

When Curtis was six, his father owned ninety-seven clocks.

When Curtis was twelve, the total had reached one hundred and forty-seven clocks of varying shapes and sizes, including nine grandfather clocks and, in the second floor hallway one loud and distinctive cuckoo clock that incurred irreparable and unexplained damage at some point between Curtis’ thirteenth and fourteenth birthdays.

Young Curtis’ aural landscape consisted of ticks and tocks, of whirling gears, and of swinging pendulums. He knew the resonance and pitch of each and every clock and knew every tick from every tock for no clock kept the same time. He was bombarded from all sides, including, because his bedroom was on the second floor, from above and below: 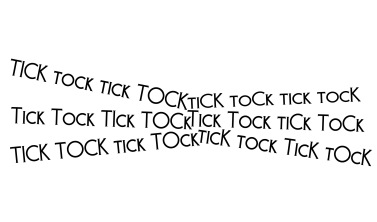 On one occasion—twelve years nine months and eighteen days before the encounter with the spoon man—Curtis spent an entire afternoon manually resetting each clock so that every tick and tock would coincide with every other tick and tock:

The collector of clocks—Curtis’ father—had fallen asleep. A curling mass of flesh and bone and sinew in a plush red leather chair—a shade of red found only in plush leather chairs. The collector jolted awake by the sudden noise found his own personal ticker had ceased to tick.

Curtis met the spoon man at the theater. This man had two particular talents. First—he could (for a fee) stuff small furry animals down his trousers and perform various feats of perambulatory entertainment. Second—he could play Beethoven’s Ninth Symphony using only a pair of spoons. He listened to the story of Curtis’ childhood, and smiled when Curtis complemented his performance. Three days four hours and fifteen minutes later, the man of spoons was on an outbound train. He never met Curtis again.

His mother had collected spoons.