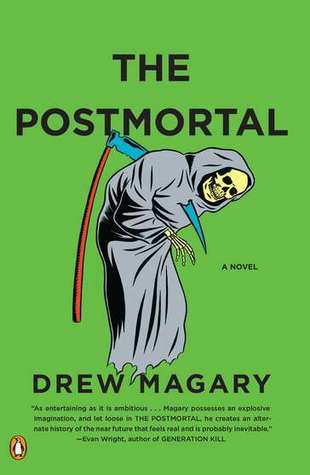 is an intriguing pre-apocalyptic at a world where science has finally provided the ‘cure’ for old age and near immortality requires only a relatively inexpensive gene therapy. Diseases are still fatal. There are still accidents and murder, but eternal life is suddenly a very real possibility. The novel takes the form of blog posts and diaries written over the 60 years immediately following the discovery of the ‘cure.’

John Farrell is a lawyer with well-connected friends who manages to find a doctor willing to give him the cure while it is still illegal. He doesn’t think through the consequences. He just knows that he wants to live forever. Farrell chronicles the subsequent debate over legalization, the rise of religious cults both for and against, the political battles and the smaller cultural and personal shifts. As a lawyer in the post-cure world, Farrell finds himself dealing with a rise in lucrative divorce cases, as rich couples find that an eternity of marriage is far longer than they had bargained for. Farrell himself proves unable to commit to eternity resulting in a string of personal tragedies.

Magary constructs a compelling world out of these smaller personal consequences. Another character remarks to Farrell that eternal life, frozen at a young age forever, far from freedom may instead mean stasis, working forever with no retirement, nothing. As the novel progresses, the world tips closer and closer to dystopia and apocalypse and the consequences become increasingly dire: Farrell’s sister loses her marriage and his father, having taken the cure and been left in permanent old age, ultimately welcomes death with open arms.

is a dark satire that attempts to extrapolate a world without aging and the ultimately chaotic upheaval that would follow. As a picture of a slow motion apocalypse, the novel is well paced and thoughtful. It is strongest and most original in its smaller moments where this new world is painted in personal moments. John Farrell’s story eventually heads into more clichéd territory and the novel’s climax is more conventional and sudden than the slow build up that precedes it. The result is a thought-provoking novel filled with imagination and ideas that could have been more.

The Postmortal can be found here

One thought on “Book Review: The Postmortal by Drew Magary”