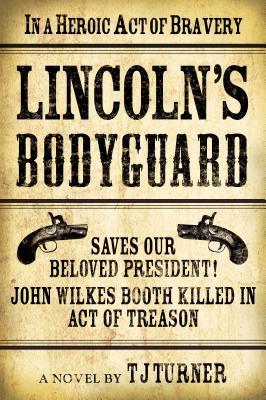 is an alternate history adventure story set in an antebellum world where Lincoln survived John Wilkes Booth’s assassination attempt and has presided over a restive South engaging in guerrilla warfare. By an accident of scheduling, I find myself reading and reviewing two alternate history novels in a row. Turner is playing in one of the more common alternate history sandboxes—the US Civil War. It is a period of history that I have read about extensively, in many ways it is the period I know the best. Turner’s setting speculates and extrapolates what the Reconstruction South would have looked like if Lincoln had survived. It is a thought-provoking what-if, and it is one that I, myself, have had conversations about. This makes Lincoln’s Bodyguard a difficult novel for me to see straight.

On the one hand, my knowledge of the period, interest in the premise (and I’ll admit, the cover), made me very excited to read this novel. On the other hand, I have my own, often deeply entrenched, ideas of many of the historical figures that inhabit the novel, and my own vague sense of how I believe events would have gone and Turner’s interpretations and extrapolations occasionally run against mine in a direct and distracting way, usually with regards to small things. His occupied South in the midst of occupation and guerrilla warfare is well realized and feels real. Likewise, his North run by Gilded Age business interests is plausible. Neither tallies with my own ideas, but they are both perfectly reasonable with a firm basis both in history and in current events. Turner, however, is far kinder to Allan Pinkerton than I am. This feels like historical (or alternate historical) nitpicking, which I admit it is, but my more cynical view of Pinkerton ultimately has a larger effect than I initially expected.

The titular bodyguard, Joseph Foster, is half-white and half-Indian, and is Pinkerton’s man through and through. After saving Lincoln’s life, Foster becomes a target for Southern retribution and leaves Washington for many years before being recalled to perform a secret and delicate mission for Lincoln, a mission that could save the country or doom it and their families.

For all my historical nitpicks, Lincoln’s Bodyguard

is a fast paced adventure story through a well-researched and grounded historical setting. Foster is an engaging character whose loyalty to Lincoln and to his own broken family makes for a suspenseful drama. Turner had a deft hand at action and deliberately raises the stakes and the tension throughout. There is also a delightful use of real history as a subtext for events—most clearly in the parallels between the climax and John Wilkes Booth’s escape and chase from Ford’s Theater.

There is a great deal to enjoy here for fans of alternate history. Turner has a good grasp of facts, of pacing, and of character. Lincoln’s Bodyguard is an impressive debut. However, I was never quite able to see through my own knowledge of the period, which colored my enjoyment.

Lincoln’s Bodyguard can be found here