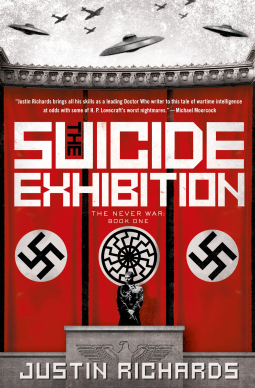 is the first novel in an alternate WWII, sci-fi romp. Richards is no stranger to science fiction, having edited the BBC Doctor Who line for many years and written a number of Doctor Who books as well, one of which involved aliens and the Third Reich. The Suicide Exhibition is, therefore, familiar and comfortable ground.

Hitler and Himmler’s obsession with the occult has fueled an entire subgenre, and Richards is well versed in the tropes and the history. The usual suspects are all present and he adds ingredients from Edward Bulwer-Lytton’s 1871 novel The Coming Race, as well as British occult figures into the mix. The result is pulp fiction at its most confidently pulpy.

Major Guy Pentecross and pilot Sarah Diamond are lightly sketched, and essentially wander into the plot out of curiosity. British spy, Leo Davenport, and Miss Manners, a secretary with friends in dark places, are more interesting but secondary and the aliens themselves are suitably menacing.

is a fun and interesting combination of ideas and set pieces placed against a familiar WWII backdrop. The first in a series it is mostly concerned with setting up its characters and moving the pieces on the board. Justin Richards has a practiced hand and gets everyone into position, while telling a fast-paced adventure. Pure silly fun.

The Suicide Exhibition can be found here