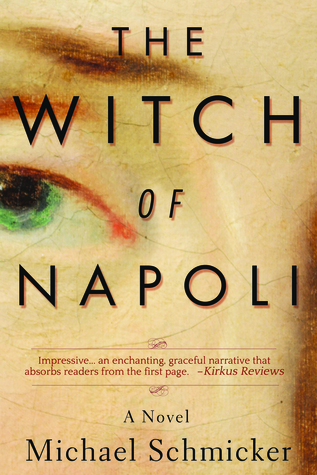 Michael Schmicker’s The Witch of Napoli

is an engrossing historical tale based in part on the life of Eusapia Palladino, a 19th century Italian Spiritualist and medium who toured Europe and was examined by numerous experts before being dismissed as a clever but fraudulent fake. Schmicker’s fictional creation, Alessandra Poverelli, is a Neapolitan peasant and medium who purports to be able to levitate tables, summon apparitions of the dead, and most chillingly of all, be possessed by the spirit of Savonarola.

When a young newspaper reporter, Tomaso Labella, photographs her levitating a table at one of her séances in Naples, the picture catapults her to local celebrity and accelerates Tomaso’s career. Tomaso’s boss, the editor of a local newspaper, plans to lure the noted psychiatrist Camillo Lombardi, a noted skeptic with a history of debunking psychics and mediums. What he experiences with Alessandra changes his life. Although he remains skeptical of ghosts and spirits, he becomes convinced that Alessandra is proof of some latent telekinetic power perhaps only accessible to hysterics. He pins his reputation on this theory and funds a European tour challenging experts and scientists to test Alessandra’s powers. He sacrifices his marriage in this bid to redefine and rewrite turn-of-the-century science. He offers Alessandra more money than she has ever imagined and the chance for freedom from an abusive husband. She leaps at the chance. Their twin ambitions lead them across the Continent. Ultimately the debonair and arrogant Nigel Huxley, a member of England’s Society for the Investigation of Mediums hatches a plot to expose her as a fraud which culminates in a dramatic séance back in Naples.

Alessandra’s story is told through the sympathetic and besotted eyes of Tomaso Labella. He is instantly infatuated with her and follows her and Lombardi throughout Europe. His involvement with her carries him from lowly photographer taking illicit photographs on the side to the editor of a powerful newspaper in his own right. His relationship with Alessandra is touching, occasionally fumbling and tragic. She is a broken woman with a well of strength and a dark secret.

Schmicker takes the reader across Europe mixing historical figures and fictional characters into an expertly crafted and engrossing world. Turn-of-the-century Naples comes alive filled with politicians, newspapermen, mafia, psychologists, religion and spiritualists. The question of Alessandra’s powers hangs delicately over the text. A Neapolitan peasant himself, the infatuated Tomaso shares Alessandra’s superstitions and seldom doubts her powers. Schmicker is more careful and keeps the reader guessing until the final séance. The Witch of Napoli

is an enchanting and mesmerizing novel. Highly recommended.

The Witch of Napoli can be found here