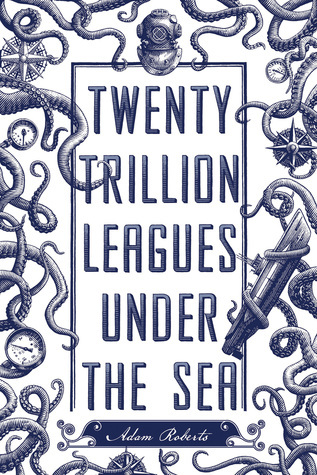 is, as the title suggests, homage to the world and imagination of Jules Verne. I have a particular fondness for the original Twenty Thousand Leagues Under the Sea. I’ve probably read it seven or eight times, to say nothing of the movie. Therefore, I was both intrigued and a little worried by the title.

Set in 1958, it follows the maiden voyage of France’s first nuclear submarine. Built and launched in secret, the Plongeur has a skeleton crew, the most experienced submarine captain in the fleet, a pair of Indian scientist who helped design the craft, and a mysterious observer on behalf of De Gaulle himself. On the second day of the voyage, the ship vanished and all hands were lost, presumably crushed to death beneath the Atlantic Ocean. The truth is far stranger. The Plongeur plummets to certain destruction. The pressure should have crushed it, and yet the crew survives. The pressure lessens and the ship continues to sink deeper and deeper, deeper than should be possible.

Roberts creates a perfect sense of claustrophobia. The twelve characters stuck together in inexplicable circumstances are all distinct and begin to crack in different ways. Captain Adam Cloche, a veteran of the World Wars retreats to discipline and a single-minded, hysterical determination to return home. Others turn to the bottle, or science, or religion as one by one they crack. Then there is the secretive Alain Lebret, De Gaulle’s personal observer, whose wartime record is not as patriotic as the others. Roberts does not shy away from some of the uglier sides of the period. There is a barely restrained hostility towards Lebret, who had ties to Vichy France that Cloche and the crewmen do not forgive and do not forget. And the Indian scientists, Amanpreet Jhutti and Dilraj Ghatwala, are regarded patronizingly at best by most of the crew, except Lebret. The politics and bad blood build even as the submarine’s situation becomes increasingly surreal.

Twenty Trillion Leagues Under the Sea is not a pastiche or, strictly speaking, a sequel to Verne, although Captain Nemo makes an appearance of sorts. Roberts brings his own concepts to bare as the Plongeur sinks even deeper than the titular depth. There are questions about the multiverse and the nature of reality woven into the tale of survival and internal conflict. The climax was, perhaps, more segmented than intended and introduces concepts that deserved to be more thoroughly explored, but deliberate ambiguity is a trait that Roberts has put to good use in previous novels. Ultimately neither as superficial as the pulp fiction pastiche I was half-expecting, or as deep as it strives to be, Twenty Trillion Leagues Under the Sea

is a worthy successor full of incident and grand ideas.

Twenty Trillion Leagues Under the Sea can be found here