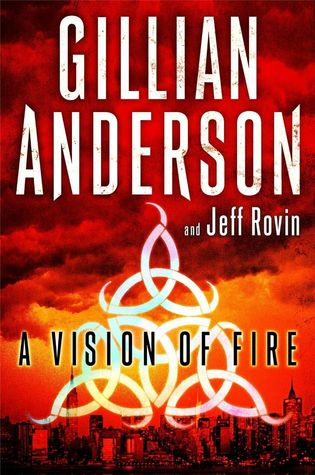 A Vision of Fire

is Gillian Anderson’s first novel, although it is co-written with Jeff Rovin a New York Times bestselling author primarily of thriller, horror, and military suspense. In many ways, this is a perfect literary match. Rovin has a proven track record with high concept thrillers and Gillian Anderson remains best known for playing Dana Scully on The X-Files. This is a high-powered combination and while I don’t want to speculate regarding how much writing author did, A Vision of Fire definitely does not have the feel of a first novel, or even a second.

Before proceeding, I should probably admit that, shamefully, I have never watched The X-Files in its entirety, not even a complete season. I have, however, seen a great amount of Gillian Anderson’s subsequent work and count her among my favorite actresses. Nevertheless, for someone who first saw her in Bleak House, Gillian Anderson writing a science fiction thriller does not have the same frisson it might otherwise.

A Vision of Fire follows a respected child psychologist, Caitlin O’Hara, as she grapples with the most challenging case of her career against the backdrop of escalating nuclear tensions between India and Pakistan. Maanik, the daughter of India’s ambassador to the United Nations, appears to be having a psychotic break following the attempted assassination of her father. She is speaking in tongues, going into trances, and attempting to harm herself, almost as if possessed. O’Hara soon learns of a number of other similar cases among teenagers across the world and discovers an ancient connection that tests her to the limit.

O’Hara’s story is the through line of the novel and is well realized. Her home life with her partially deaf son is only partially realized and never fully integrated. But the crisis, and her personal quest to help Maanik has unexpected emotional weight. When reading about a icy, professional, career woman written, at least in part, by an actress whose made a career out of portraying icily competent career women, it is difficult not to conflate the two. Partially this is deliberate, but I think does them both a disservice. O’Hara does manage to rise above being simply the Gillian Anderson character.

The plot, however, is action packed but meandering. There is an entire subplot that never intersects with O’Hara but seems to exist entirely to set up further books in the series.

Overall, A Vision of Fire

is a fast-paced, workman-like thriller that keeps the reader’s interest but is never particularly surprising.