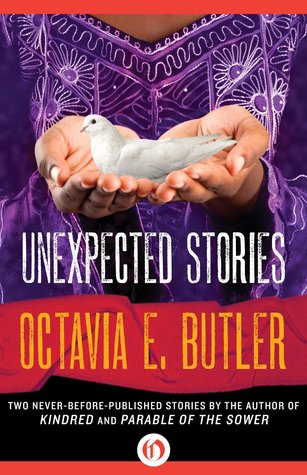 Octavia E. Butler was a Hugo and Nebula award-winning author of a number of series including Patternist, Xenogenesis, and Parable, as well as a many other stand alone novels and short stories. Unexpected Stories

is a posthumous collection of two previously unpublished novellas—”A Necessary Being” and “Childfinder.”

“A Necessary Being” is the longer of the two works and creates a strange, yet recognizable, alien world after the fall of a great civilization. Tahneh is a Hao, whose greater height, strength and intelligence mark her and her kind apart, make them the natural and required leaders. Every clan and tribe must be ruled by a Hao, as a matter of survival and the Hao wields ultimate power in every matter save that of succession. Tahneh’s own father was taken by force and crippled, held prisoner and forced to rule. Now Tahneh, unable to produce an heir, is faced with a terrible choice. Another Hao has been seen, and she must decide whether or not to subject her kin to the same treatment her father received.

Butler uses this scenario to examine hierarchy and power dynamics, the nature of duty and loneliness. Tahneh is a lonely character, filled with secret bitterness, but an overriding belief in duty and in serving her people. Her predicament is interesting but never quite touching. It was interesting more than engaging, though that may simply be a result of the shorter novella length.

“Childfinder” although the shorter of the two, had a sharper more immediate bite. Set in the real world, it concerns a dissident group of telepaths and shows that, while telepathy and people with special powers are often used as metaphors for racism and class struggle, in reality telepaths are just as likely to be racists and subject to the same destructive cultural forces. It hints at a larger world, a larger conflict, but feels self-contained. The tragedies and self-destructive impulses are all present in the story. Barbara, an African American telepath with the ability to locate future telepaths has broken from an organization of predominately white telepaths, and even though she knows she is ultimately propagating the same mistakes, she cannot help but leave her students and fellow dissidents a legacy of bitterness, hatred, and revenge.

I had personally never read any of Octavia Butler’s previous work, but Unexpected Stories

is a wonderful introduction to her voice and world.