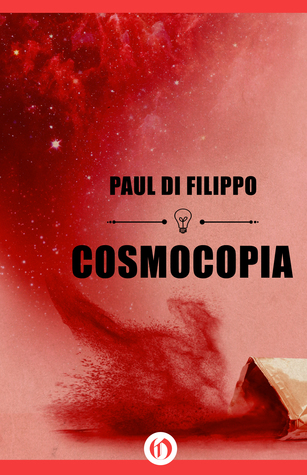 follows Frank Lazorg, an aging fantasy illustrator and painter who is recovering from a stroke and has lost the will and energy to paint. A mysterious package filled with a vibrant new paint and drug, reawakens Lazorg’s ambitions and jealousy and leads him on a violent, dangerous, surreal path into new and stranger dimensions.

As always, Di Filippo brings a great deal of depth and imagination to his subject. Lazorg’s twilight years—shunned by his muse, tended by indifferent caregivers, plagued by younger rivals and reporters—are intimately and poignantly rendered. Lazorg was never a kind or loving man, but in his bitterness he feels desperately real and that desperation leads him to a terrible act.

The second part is a masterpiece of world building. Lazorg finds himself in a new world, closer to the Conceptus—the beginning of the multiverse or cosmocopia. Here physics and concepts are different. There is no writing or painting, the very ideas are foreign. Crutchsump, the bone-scavenger who takes Lazorg in, however, is an instantly familiar character, for all her physical strangeness. In her own way she is as desperate and lonely as Lazorg was, and that desperation leads her to her own terrible and irreparable decisions. The choice to largely tell the story of a new world from the perspective of someone who has always lived there pays dividends. Lazorg becomes the monstrous alien thing, despite being the readers’ most familiar point.

The final section is the shortest and most metaphysical and surreal. The sense of character and world building that sustained the first two parts is largely dropped. This is a deliberately stripped down world, a grey desert void between realities, that ultimately results in a final confrontation. Unfortunately, Lazorg who was a strong presence in the first part and slightly less so in the second, becomes less a character than an observer in the final section, his motives and personality largely fading.

is a delightfully surreal novella with a pair of lonely desperate characters at its heart, and a wealth of interesting concepts about the nature of the universe, and, indeed, art. The ending, however, feels rushed and half-formed, understandable in a novella, and Lazorg, while ostensibly the main character, looses focus over the three sections. Nevertheless, this was an engaging and fascinating read.