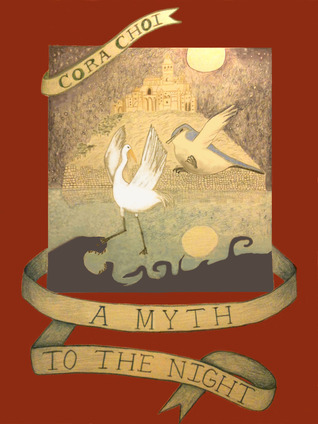 Cora Choi’s A Myth to the Night

is a Young Adult fantasy novel set in an alternate history controlled by the secretive and exclusive Order. Four hundred years ago, Hugh Fogg was sent to Stauros Island to become a monk in the Order of the Crane. He spent his life studying and diligently recording myths and legends, until a rival order arrived and massacred the monks. Hugh has remained a phantom, the keeper of an old story and prophecy waiting for the Slayer of the Shadow of Fear. Meanwhile, the victorious Order of the Shrike has turned the island into a school and slowly spread their influence across the world.

Cora Choi has an easy to read style that draws the reader into this world of draconian school rules, ancient orders, phantoms, myths, and madness. Hugh and his compatriots are reasonably well drawn and the plot, while predictable, is fast moving and often engrossing. The world outside Stauros Island, however, is only vaguely depicted. For a secret order dabbling in dark powers, and successfully ruling most of the world, the Order of the Shrike is only partially sketched out, and its global influence is referred to but never truly felt.

A Myth to the Night

skirts the edges of fascinating ideas, ideas society and the nature and role of stories but never quite engages with them. Cora Choi has a deft hand for prose and has gathered an intriguing mix of ideas and references, but for me this was ultimately a novel that never quite lived up to its promise.