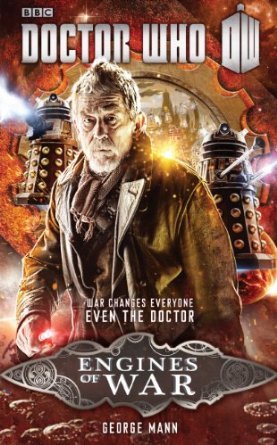 The trouble with the Time War is that it’s largely unfilmable and on some level simply undepictable. The grandiose epic sweep promised by phrases like the Gates of Elysium, the Fall of Arcadia, the Skaro Degredations, the Could’ve Been King with his Army of Meanwhiles and Neverweres gains much of its power and poetry from being unseen. Steven Moffat has already walked this tightrope in the Day of the Doctor, but George Mann has the unenviable task of wading straight into the front lines.

Doctor Who: Engines of War

is explicitly a novel of the Time War starring the John Hurt Doctor, or the War Doctor. Mann builds an incarnation of the Time Lord Formerly (and Futurely) Known as the Doctor out of the tidbits of John Hurt’s performance. This is a fierce, war-weary Doctor full of righteous anger, moral doubts, and few twinkles. Given the scarcity of source material, Mann has done a good job of constructing a version of the character that feels distinct.

The companion for this novel is Cinder, a human resistance fighter who scratches out an existence simply trying to kill as many Daleks as she can before being exterminated. Her encounter with the Doctor shows her the possibility of another way and takes her from the ruins of her planet to the High Council of the Time Lords and finally before a secret order of Daleks.

As with the Doctor, Mann constructs a version of the Time War out of as many tidbits and continuity references as possible. Everything from the Skaro Degradations to the Death Zone of Gallifrey. I was half expecting Romana’s fate to be finally revealed. As a result the Time War becomes, a series of discussions. Time Lords in funny hats discussing the fate of the universe.

The plot is engaging and fast moving and the War Doctor is well-developed. Nevertheless, George Mann had an impossible task. He clearly knows and loves Doctor Who, which is both a strength and a weakness. Doctor Who: Engines of War

is a valiant effort, but ultimately falls short of its lofty goals.