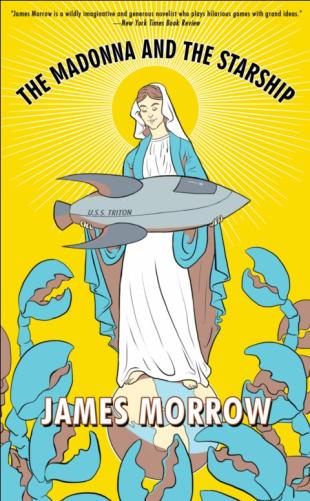 Set in the world of 1950s television, The Madonna and the Starship

is a loving satire and a spoof of the golden age of television, of 1950s science fiction at its silliest, and of religion and rationalism. It is, in short, exactly the sort of novel I should love. The title, the cover, the very idea of nihilistic, arch-rationalist, anti-religious, extraterrestrial lobsters contacting a TV hack writer and forcing him on pain of death ray to prove that humanity is as rational as they are is exactly the sort of craziness I usually enjoy. Sadly, it never quite lived up to its promise for me.

Kurt Jastrow is a science fiction writer churning out weekly episodes of Brock Barton and His Rocket Rangers when he is contacted by alien lobsters from the planet Qualimosa who have seen his broadcasts and want to give him an award. This is complicated when they become aware of the “televised irrationality” of Not By Bread Alone, a Sunday-morning religious program, and offer to cleanse the world of irrationality. Kurt and Connie, his love interest and coincidentally the writer of Not By Bread Alone, make a frantic effort to rewrite the religious program as a biting satire, and thus save millions of people from lobsters wielding death rays.

To be fair there are a fair number of laughs, and Morrow treats everyone with equal opportunity satire, but it was hard to escape the feeling of missed opportunity. The concept is filled with inspired lunacy and satirical possibility, the end result seems to barely scratch the surface. There are a number of sharp and pertinent observations. The Madonna and the Starship

is a well-researched, philosophically grounded novel that never quite lives up to its ambition.

**Received copy from NetGalley for review